End Game: Sony A9 Mark II is the best camera for now - ILCE9M2 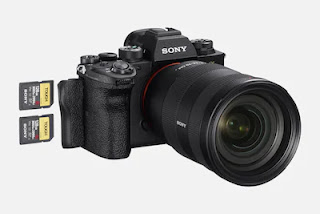 These days, all will claim this best, that best ...

It really depends, best for whom and for what, but in the past few years there has been a very aggressive mirrorless camera system
poured out their technologies. Yes, it's Sony, Sony comes in full force, unlike Canon, we don't say Canon is ugly, but, as consumers we want to buy canon right? and there are always those who cancel, sometimes too overprised, or features that don't exist, the image is too soft on video, etc.

Sony a9 II Comes with More Advanced Design and Special Features Professionals, Two years ago, Sony a9 proved that mirrorless cameras can compete with DSLRs in terms of performance, not just limited to image quality. So fast is the ability of a9 to take pictures without stopping, the results can be put together into a very smooth video.

Sony knows this camera is not for everyone. That is why its successor, the Sony a9 II, brings updates that are prioritized for the needs of professional photographers. Basically, the second generation is designed to increase the workflow of professionals while still offering improvements in a number of other aspects.

Improvements to this workflow are realized through more complete connectivity. a9 II packs a Gigabit Ethernet port, an essential connection for photographers who require fast and stable data processing. Not only that, the A9 II even packs a more superior Wi-Fi chip that supports networks at 5 GHz (Wi-Fi AC) frequency in addition to the more common 2.4 GHz.

Still about improving workflow, the A9 II offers a quite interesting feature called Voice Memo. Thanks to this feature, photographers can dictate information to be used as attachments in the photos they want to submit to interested agencies, which in turn will help speed up the review process of agency representatives.

Regarding performance, the a9 II stretcher was classified as incremental. The 24.2 megapixel stacked type full-frame sensor used is still the exact same, but the processor is said to bring an increase in autofocus speed as well as its accuracy, not to mention the responsiveness of its electronic viewfinder (EVF). As far as we know, there are no other cameras on the market with this stacked sensor model

The number of autofocus phase-detection points embedded on the sensor is still exactly the same, but Sony says the tracking capability of the subject can be increased through the application of a new algorithm. Its superior feature, burst shooting speeds of up to 20 fps using an electronic shutter, still hasn't changed, but the burst speed using a mechanical shutter rises to 10 fps.

Physically, a9 II presents a number of revisions as we find it on the Sony a7R IV. The hand grip is thicker, so is the size of the button, the knob and the joystick that also enlarges, with a more optimal placement as well. Sony did not forget to perfect its weather sealing aspect, especially in parts of the A9 II ports, again similar to what they applied to the A7R IV.

Another small change, the A9 II packs a better internal stabilization system, although the difference is limited to 1/2 stop exposure. The two SD card slots now support the UHS-II type, while the battery life is up slightly, and the camera can now directly receive power from the USB-C port.

Even though it's best, we are still loyal to our old cameras, so there is no reason for a new camera, instead we play a lot with Sony A6400 for daily activities.

But if you are a camera with the highest speed, don't look anywhere else, Sony A9 Mark II is the answer