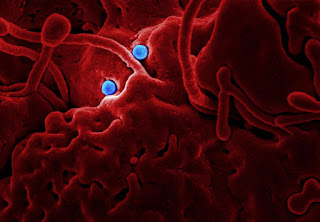 Viral microorganisms are parasites that infect cells of biological organisms. Viruses can only reproduce in living material by invading and utilizing the cells of living things because they do not have cellular equipment to reproduce themselves. In the host cell, the virus is an obligate parasite and outside the host becomes helpless. Usually a virus contains a small amount of nucleic acid that is covered with a kind of protective material consisting of protein, lipids, glycoproteins, or a ombination of all three. The viral genome encodes both the protein used to contain genetic material and the protein needed in its life cycle. Viruses usually refer to particles that infect eukaryote cells (multicellular organisms and many types of single cell organisms), while the term bacteriophage or phage is used for types that attack prokaryotic cell types (bacteria and other organisms that are not cell-nucleated). In the body of the virus contains only one nucleic acid, namely DNA or RNA


a. Viruses with DNA core acids

This virus infects host cells and reproduces itself into some DNA. Some viral DNA undergoes transcription into mRNA that produces viral protein sheath. mRNA produces enzymes that can destroy host cell walls. The destruction of the host cell makes new viruses scatter out and these new viruses are ready to infect other host cells. Examples of DNA nucleic acid viruses are smallpox, herpes viruses, and bacteriophages.

b. Viruses with RNA Core Acids

Viruses with RNA core acids are classified as very malignant, one example is HIV AIDS. The AIDS virus RNA infects the host cell, then does a reverse translation to form new RNA-DNA and form the DNA of the virus. Furthermore, viral DNA enters the host cell's nucleus which causes the host DNA to contain viral DNA.

The virus does have a lifestyle that is different from other kingdoms. Viruses can live only if they attach to host cells with parasitic properties. The virus is said to not live if he crystallized. Viruses can spread in different ways and with different media as well.

Viruses are often debated their status as living things because they cannot carry out their biological functions independently. Because of these characteristics the virus is always associated with certain diseases, both in humans, animals or plants.

- [x] Can be crystallized

- [x] Activities must be in the cells of living things

The characteristics of a virus can only be observed with a special microscope, if it infects human cells, the host human being, may not necessarily show certain symptoms. Viruses, if observed, also have the structure and anatomy of the body, although each type of virus varies, but I take for example:

Structure and anatomy of Viruses

The virus's head contains DNA and its outer covering is capsid. One unit of protein that makes up a capsid is called a capsomer.

Capsid is a sheath in the form of protein. The capsid consists of capsomer. The capsid can also consist of monomeric protein consisting of polypeptide chains. The function of capsid is to give the form of the virus as well as to protect the virus from environmental conditions that harm the virus.

Virus tail is a tool to attach to its host. The tail of the virus consists of clogged tubules with threads or fibers. Viruses that infect eukaryotic cells do not have tails.

The smallest virus is only 20 nm in diameter (smaller than a ribosome).

Helical: The tobacco mosaic virus has a helix shape.

Other forms are possible, including nonstandard forms that combine helical and icosahedral forms.


Viruses can jump through the media of blood, water, food, even ice water. At the time of this article, WHO had declared coronavirus a dangerous status. Hopefully the government is alert in handling it, lest Indonesia be affected by the dangers of these viruses. This small object / creature.

How to reproduce viruses is known as proliferation which consists of:

Characterized by the attachment of the virus tail to bacterial cells. After sticking to the virus secretes the enzyme lysoenzim (enzyme destroyer) to form a hole in the bacterial wall to enter the acid virus core.

The parts of the virus that have formed, by bacteria will be assembled into a perfect virus. The number of viruses formed around 100-200 pieces in one lithic cycle.

After inserting DNA the inactive virus is called profag. Then the bacterial DNA replicates to divide.

Viral DNA synthesizes to form parts of the virus

After the virus forms parts of the virus, and then DNA enters it will form a new virus

After assembly is complete, bacterial cell lysis occurs. Virus that is released from the host will find a new host

viruses may also have one effect on one type of organism, but different effects on another. This explains how a virus that attacks cats, might not infect dogs.

Viruses have varying complexity. They consist of genetic material, RNA or DNA, surrounded by layers of protein, lipids (fat), or glycoproteins. Viruses cannot replicate without a host, so they are classified as parasites and they are considered the most abundant biological entities on the planet.

Here are some important points about viruses:

- [x] Viruses are living organisms that cannot be replicated without a host cell.

- [x] They are considered to be the most abundant biological entity on the planet.

- [x] Diseases caused by viruses include rabies, herpes, and Ebola.

- [x] There is no cure for viruses, but vaccination can prevent its spread.


Before entering the cell, the virus is in the form of virion.

During this phase, the virus is about one hundredth the size of a bacterium and consists of two or three different parts:

Genetic material, either DNA or RNA protein coats, or capsids, which protect the genetic information of lipid envelopes are sometimes present around the protein coat when the virus is outside the cell. Viruses do not contain ribosomes, so they cannot make protein. This makes them truly dependent on their host / host / host. They are the only type of microorganism that cannot reproduce without a host cell.

After contact with the host cell, the virus will insert genetic material into the host and take over the host's function. After infecting cells, the virus continues to reproduce, but produces more viral protein and genetic material than ordinary cellular products. This is a process that produces a parasitic classification virus. Virus is clearly a parasite.


Viruses do not leave fossil remains, so they are difficult to track over time. Molecular techniques are used to compare DNA and RNA of viruses and find out more where they come from.

Three competing theories try to explain the origin of viruses.

Regression hypothesis, or reduction: Viruses begin as independent organisms that become parasites. Over time, they release genes that don't help them become parasites, and they become completely dependent on the cells they inhabit.

Progressive hypothesis, or escape: Viruses evolve from parts of DNA or RNA that "escape" from the genes of larger organisms. In this way, they gain the ability to become independent and move between cellsl.

The first virus hypothesis: Viruses evolved from complex molecules of nucleic acids and proteins either before or at the same time as cells first appeared on Earth, billions of years ago

Viruses only exist to reproduce. When reproducing, their offspring spread to new cells and new hosts.

The virus can spread from person to person, and from mother to child during pregnancy or childbirth.


They can spread through:

- touch
- exchange of saliva, coughing, or sneezing
- sexual contact
- contaminated food or water
- insects that carry them from one person to another
- Some viruses can live on an object for some time, so if someone touches an item with a virus in his hand, the next person can pick up the virus by touching the same object. The object is known as fomite.

When the virus replicates in the body, it starts affecting the host. After a period known as the incubation period, symptoms may begin to appear.

What happens if the virus changes?

When a virus spreads, it can take some of its host DNA and carry it to other cells or organisms. If a virus enters the host DNA, it can influence the wider genome by moving around a chromosome or to a new chromosome. This can have a long-term effect on someone. In humans, this might explain the development of hemophilia and muscular dystrophy.

This interaction with host DNA can also cause viruses to change. Some viruses only affect one type of creature, for example, birds. If a virus that normally attacks birds accidentally enters humans, and if it takes human DNA, this can produce a new type of virus that might be more likely to affect humans in the future.

This is why scientists are worried about a rare virus that spreads from animals to humans. Don't be overly confident, when memes are scattered, stating that Indonesians are immune to coronaviruses, because viruses can adapt, like living things, so beware.

Almost all viruses are human enemies, but there are also symbiotic mutualisms with humans, such as viruses that infect the e.coli bacteria.